Posted on January 7, 2019 Categories: News Comments are off for this post

Cancer Survivors Against Radon (CanSAR) Board member Kyle Hoylman has announced the selection of Rachael Drazan Malmberg as President of the nonprofit advocacy group. Malmberg takes over the position he has held following the loss of Elizabeth Hoffmann, the organization’s founding President, due to radon-induced lung cancer.

Malmberg, a 32-year-old mother and career woman who has faced sports-relat 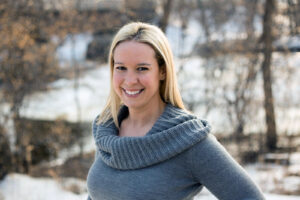 ed challenges for many years, now faces the challenge of surviving Stage IV lung cancer so that she can be here to raise her young daughter. A healthy nonsmoker, Malmberg was shocked to learn that she had lung cancer, and angered to learn that it was caused by the radioactive gas, Radon, which exists in all buildings but can cause lung cancer when indoor levels are high. Her current home and childhood home both tested high for radon.

Since her diagnosis, Malmberg has been an advocate for lung cancer awareness and particularly awareness of the role radon exposure plays in lung cancer deaths. “Over 21,000 die from radon-induced lung cancer in the U.S. alone…one every 25 minutes,” she states. “Until I was diagnosed, I had never heard of radon. Now I’m determined to save others from having the same experience. Everyone needs to know about radon and the risks of radon exposure. I see my role at CanSAR as an advocate for promoting radon awareness through education and state legislation.”

Malmberg has appeared in several television news interviews and has spoken for awareness at multiple events, including the American Lung Association’s LUNG FORCE Oxygen Ball in  Minneapolis, where she said, “I am on this journey for a reason. Right now my job is to fight, learn, communicate and positively impact others. To make a difference in any way possible.”

CanSAR is dedicated to preventing radon-induced lung cancer and saving lives through advocacy, awareness, and outreach. It was founded in 2005 by Elizabeth Hoffmann, who was diagnosed with stage IIIA lung cancer in 2003 at age 37. Liz had never smoked and had no family history of lung cancer. When her home of over 15 years was tested for radon, the results showed a level more than twice the U.S. EPA’s “take action” level of 4 pCi/L. Among CanSAR’s successes are the Radon Awareness Acts passed in Illinois and Minnesota.

Kyle Hoylman says, “CanSAR continues to build on those successes and we will continue to advocate until every house and building has been tested for radon and, if they tested high, the radon has been reduced.”